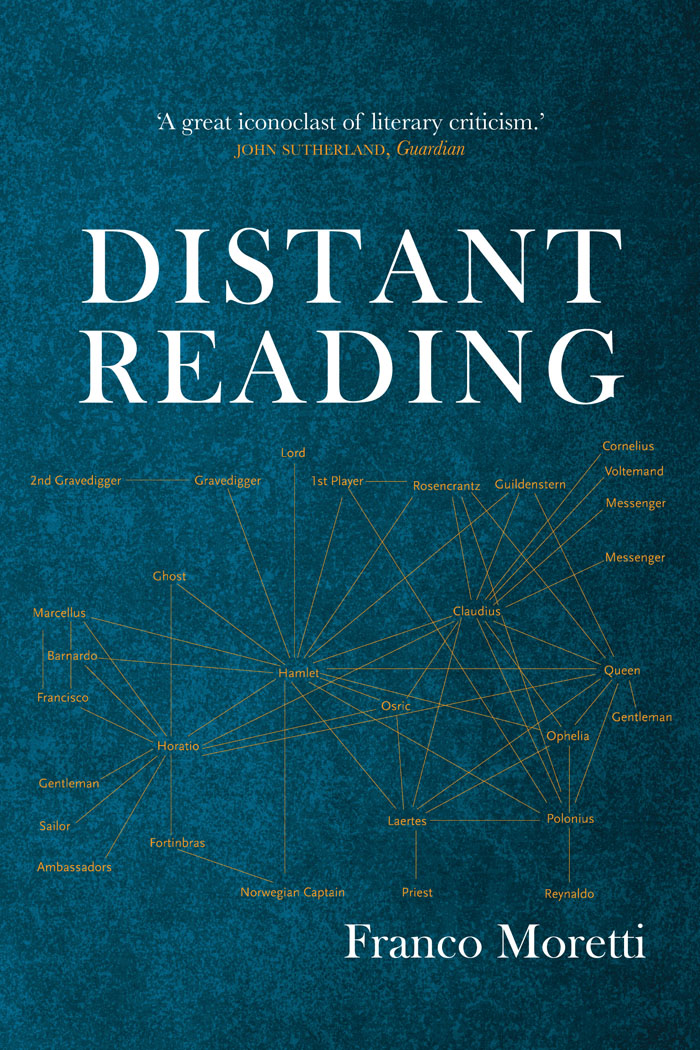 If there were a Nobel Prize for Literary Studies, Franco Moretti would have deserved his understanding of “Distant Reading”. But although Franco Moretti’s “Distant Reading” is in my opinion one of the most innovative methodological approaches currently available in literary studies, Moretti also shows that these are only the first steps being taken in a field that is not yet clearly defined. In his book “Distant Reading” he has compiled all of his essays on the topic. So it ends up being a collection of papers which have been very important for the digital humanities. In these essays, he succeeds in both inspiring his readers and encouraging them to critically review the method.

“It won’t help to read more”

Each of the essays in Franco Moretti’s “Distant Reading” volume come with a short introduction. In the one preceding his essay “Conjectures on World Literature” he admits that he initially intended this to be a provocation. But in fact today, it is one of the cornerstones of the distant reading approach. Regardless of how much we read, the mass of unread material will always remain greater. Regardless of how well we know individual texts, they will never give us an overview of cultural processes. As a comparatist, Moretti rightly urges us to try harder to get an overall picture. Thus most of his essays revolve around bringing the concept of world literature back to its literal meaning. Instead of just sticking to what we ourselves consider “world-class” literature, we should try to understand what literature there is in the world.

Franco Moretti sometimes lets himself be guided a little too much by his own ideals. For example in “The Slaughterhouse of Literature” he states that not science but readers decide, which literature will survive. I fear at this point, he forgets the power of the market. After all, people often simply read books that are well marketed. In addition to that, I miss the point that forgetting is also a very important aspect of culture (as e.g. Luhmann has shown). When he speaks of the great mass of unread and yet important books, I honestly ask myself if some of them aren’t really forgettable. Moreover, Moretti tends to reproduce the canonical with his own Eurocentric examples.

Reproducing the canonical without even wanting to

This becomes particularly clear when he tries to show in “Planet Hollywood” what influence the American film industry has worldwide. Here, for example, it would be interesting to have more data for comparison. For example the Indian film production seems to be similarly important to take into account. Here, the title “Planet” seems to be reduced almost exclusively to Europe and the “Western Worls”. I don’t even think, Moretti does this on purpose. But by choosing his examples he does not really dive into the great unread. Instead he is reproducing the canon of the western world.

A step towards “exact science” – reliability

But something that is really charming about Franco Moretti’s “Distant Reading”-approach is the genuinely scientific tactic of revealing one’s own approach. This makes it possible to understand his case studies and to verify his conclusions. He shows his data sets in simple visualizations. In them you can immediately see which parameters he is looking at. Furthermore, this approach also challenges the subsequent use of his results. Let’s stay briefly with the example of the Hollywood movies.

Here, for example, the distribution of Moretti’s data is shown in a map visualization. The reader immediately sees which data sets are missing and could start here with his own research. So if you miss some kind of data, why not go ahead and supplement Morettis case study? In this way, Indian, Asian or African film production could at some point be used for comparison. If only some readers of this study would take over a part of the research work, a worldwide picture would emerge. And this is something Digital Humanities and Distant Reading really is about. You do not have to read everything yourself. By working together we can get closer to the larger picture, anyway.

The difficulties of digitally supported analysis

In “The Slaughterhouse of Literature” not only the problem of missing data sets is revealed, but also a problem that affects the entire content-related digital literary science. In this chapter Moretti examines the connection between the use of clues in Conan Doyle’s and other detective novels. His hypothesis is that the use of clues is what made Sherlock-Holmes-novels more persistent than other detective stories. The corpus includes all Sherlock Holmes stories and similar, now forgotten detective novels. Using a hierarchical either-or model, Moretti first considers the presence, necessity, visibility and decodability of clues in the novels. It becomes apparent that on the final level only novels by Arthur Conan Doyle remain. The decodability of clues is thus literally the “Clue” of Sherlock Holmes.

An exact science without operationalizable variables?

But what is actually meant by decodability? Unfortunately, Franco Moretti fails to answer this question in the context of a definition or more detailed description of his approach. A second point of criticism is contained in one of the numerous reactions Moretti has received to his ideas, which he deals with in more or less detail in “Distant Reading”. There is fundamental doubt about the clues as the sole trigger for the assertiveness of the Holmes stories.

Unfortunately, Moretti is a little too disturbed by the example of his commentator. He suggests that the success factor could also be that Sherlock Holmes’ being a gentleman detective. In rejecting this one example so brusquely, Moretti overlooks to close the fundamental gaps in his approach. No matter if it is a question of individual categories or one of the parameters of the investigation. It should always be validated why precisely these content criteria should be decisive and how they were extracted from the text.

A look across to related sciences

At this point at the latest, my inner classical literary scholar exclaims that any interpretation supported by argumentation is a good one! There is no final agreement and validation in cultural studies anyway! After all, a text is so complex that it is never possible to make a clear distinction between individual influences. Here it is probably worthwhile to look in the direction of psychology, which has long since combined methods from the exact sciences and the humanities. Here, too, it is possible to extract variables of human decision-making to such an extent that they at least offer the possibility of operationalization. What literary studies could learn from psychology here, is the introduction of supraindividual experiments. Sometimes it is helpful to try a group of literary scientists, if you can’t get ahead as an individual researcher.

In Moretti’s case study it would be e.g. quite interesting to know, wether all interpreters always categorize the same clues as decodable. One could then state quite concretely that the decodability was assigned to 90% coinciding to the values yes and no. Of course I invented the numbers freely. After all, there was no such literary group evaluation in Moretti’s study.

As you can see from this review, which has rather become a commentary, Franco Moretti’s “Distant Reading” does one thing above all else – it encourages self-reflection. It is precisely the vulnerability of his first attempts to strengthen comparative literary studies with quantitative methods that makes readers want to hook themselves up. More than that, one would like to try out for oneself what Moretti demonstrates. And then from there one can find ones own direction into the field.

If you have a penchant for Digital Humanities already and have not yet read Franco Moretti, I warmly recommend you to read it. However, if you have no weakness for such approaches, you may find your doubts confirmed rather than dispelled. Therefore, if you belong to this category, don’t bother reading. Then wait a few more years until Distant Reading has established itself as a generally accepted literary method. Then you might look at it quite differently. 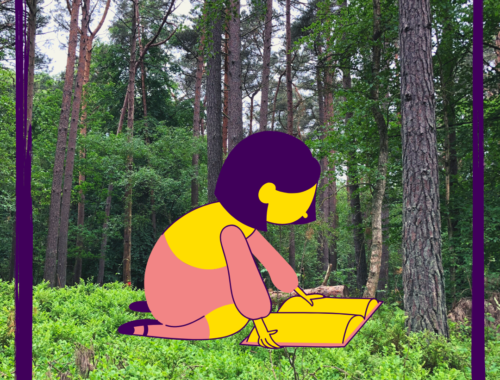 Distant Reading – how much distance can we bear? 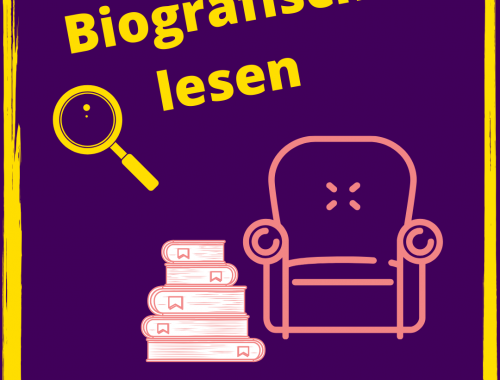 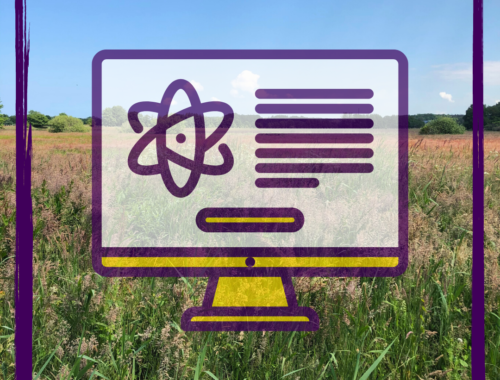 CALL FOR BLOGPOSTS ON THE TOPIC “COLORS OF DH”